Last Monday, the City of Cambridge issued a number of
restrictions, including this about parks:

The City of Cambridge’s playgrounds (areas with play
structures of any kind) are closed, effective March 16, until
further notice. Parks, fields, and courts, with the exception of
playground areas, will remain open for passive use. No
congregating, group activities or game playing is allowed. Please
maintain a distance of 6 feet from other people while enjoying
these spaces. 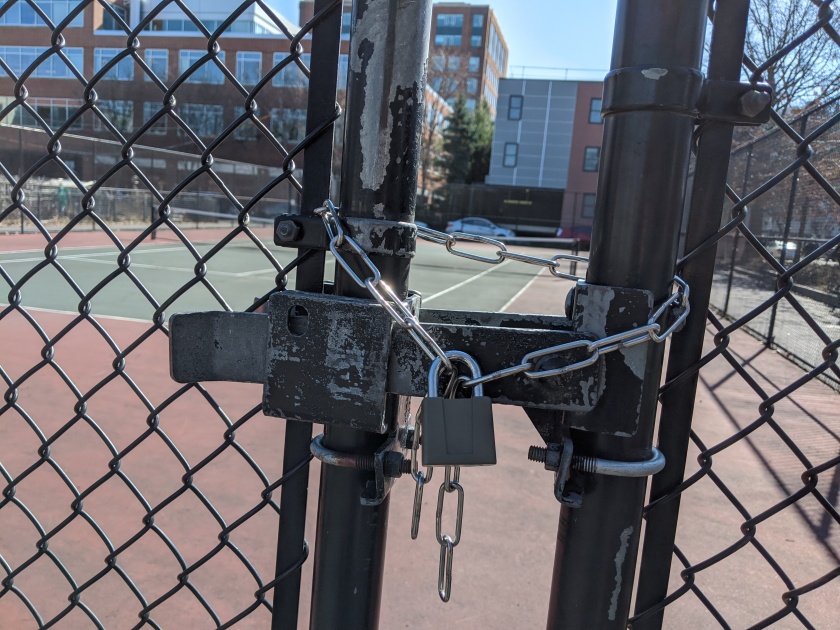 I was surprised the next day when I went to the park across the
street and found that the tennis court was locked. I kept
muttering to myself about this — there is a playground in that
park. I had seen a family on Sunday where the mother was freaking
out because the 10-year-old son wanted to play on the swings
without putting his gloves on. I suspect that family will be
pretty crabby for a while whatever restrictions are or aren’t
imposed, but I could see a reason for the playground
restriction.

But the tennis court doesn’t have any equipment that users
would normally touch. There is a rule in tennis that if you touch
the net, you lose the point. There are tennis nets with a crank
for adjusting the height, but this one would need a wrench.

So on Wednessday I wrote an email to the Department of Public Works:

I’m writing to protest the closing of the tennis court at Green-Rose
Park. The policy
states: Parks, fields, and courts, with the exception of playground
areas, will remain open for passive use.

I’m not sure what “passive use” means in this context, but I don’t see
that tennis players are usually in violation of current social
distancing guidelines. The net on that court is not adjustable
without bringing equipment, so I don’t see that it’s more of a public
health concern than a basketball net would be.

I think whoever locked the gates misunderstood the stated policy of
your department, and the mistake should be corrected.

Thank you for your attention to this matter,

On Friday morning, I got a reply:

The tennis courts were mistakenly locked. We will get someone out to
unlock them as soon as we can. We have limited crews available right
now, but they have been instructed to unlock when they are able to get
there.

And on Friday afternoon, there were people playing tennis.

This may not seem like much, but I felt the world was a little
bit better of a place because of something I did.