A pity to not be able to see it, but it probably isn’t as good as what we know and love. It’s hard to see how there could be a better goodbye than “The Shepherd’s Crown”.

20 Recipes from the World of Three Pines

Source: The Nature of the Feast — Louise Penny — Minotaur Books

Those of us who like the Inspector Gamache novels of Louise Penny enjoy the descriptions of food and meals as much or more than the grisly murders. Here’s a free download of recipes for some of the food.

This article about the changing fashions in translating Tolstoy makes a good case for sticking with Constance Garnet and the Maudes. There are numerous examples from Anna Karenina. 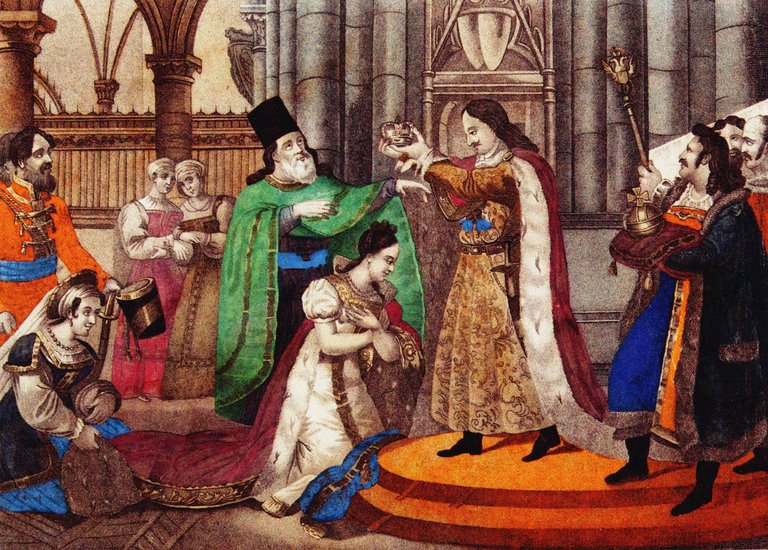 I’ve always thought that the people who want to do the Tudors (in fiction, stage, or screen) except that too many other people have already done the Tudors should look at the Romanovs.

I mentioned a few months
ago how difficult I found it to write well about Science
Fiction, although I enjoy reading it.

I realized this morning that this week I’ve read two really
good pieces of criticism that were science fiction related, so I
thought I’d pass them on to you.

It’s possible that when (if, but I’m sort of enjoying it) I
finish it, I will be bowled over and wish I had voted for it over
the three I ranked ahead of it, but really, if anyone had ever
said anything about it that made me want to read it, I would have
read some of it by now. The first volume was imitation Tolkein
by someone with a tin ear for language. I’m sort of glad I pushed
on — it improves pretty fast after that. But I’m not finding
reading the online summaries is anything like reading the books,
so I’m going to just continue reading them in order.

So my choices are:

The first three of those are what I consider “normal” science
fiction — examinations of the impact of some kind of technology
on the lives of the characters. The Stross got first place
because I thought both the technology idea (how do you do banking
over interstellar distances?) and the characters were a bit more
interesting than the Leckie and the Grant.

I voted for “The Wheel of Time” over “Warbound” because if it
does turn out to be a good fantasy series, it will be much more
the kind of thing I want to read than the “Grimnoir Chronicles”.
(I should mention that in addition to the 14 volume series
nominated as a whole, the publishers of Warbound also gave us all
three volumes of this series, and I’m not sure I’d have wanted to
read Volume III on its own.) It seems to be SF for the video
games generation, and in spite of some good writing in between the
action scenes, I found it difficult to slog through.

I considered voting for “No Award” ahead of “Warbound”, but I
decided that it was well enough written to justify an award if
that’s the kind of SF the voters really want.

The top three of these are all excellent stories. The other
two lack characterization. I voted for the Stross over the
Valente and the Duncan because I thought the Science Fiction (a
proposed life cycle for the Unicorn) was better. “Wakulla
Springs” is a well-written story, but really not SF at
all. “Six-Gun Snow White” is brilliant in spots, but doesn’t
really hang together at the end.

Again, any of the top three would be a good award winner. I
didn’t remember until I’d filled out my ballot that the Vox Day
was controversial, but I figure it doesn’t matter because I didn’t
like it without any political motivations.

Here, I do feel strongly that my number one vote is better than
the others, although I certainly won’t be surprised if something
else wins. I don’t feel strongly about the ranking of two and
three.

This
book is billed as book three of a trilogy, but I understand
book four is already out in the UK.

LIke the first two books, it takes place in a near-future
dystopia where most of the human race has been wiped out by a
genetically engineered plague. I found it a little easier reading
than the others, partly because we’ve already met most
of the main characters. Also because the point of view stays
pretty focused on Toby, who is one of the easier characters to
identify with.

The descriptions of post-apocalyptic survival strategies are
quite interesting. For instance, figuring out what to do with
kudzu is one of their problems. There’s also a long discussion of
what you can and can’t still find in drugstores.

I wouldn’t say to start with this one, but if you’ve tried the
others and found them heavy going, you may like this one better.

Since I’m posting quite a lot here about what I’m reading, I
thought I should mention how I go about acquiring it. By far the
largest set of books I read these days come from the ebook lending
system of the Middlesex Library Network. The next largest set
come from Project Gutenberg and other online free books source.
And I do buy some books, both ebooks and dead tree books, of which
maybe more later.

The ebook site is pretty complicated, so I thought I’d mention
the way I’ve eventually settled on how to use it.

If I’m feeling insecure about where the next book I read is
coming from, I do steps 2 and 3 even if I can’t do step 1.

I had read a couple of books by China Miéville and remember not
particularly liking The City and the City and
enjoying Embassytown pretty well. I read Perdido
Street Station because John Scalzi said it was the best SF book of the current century.

I finished it yesterday, and I think he may be right.

In terms of plot, it’s the normal fantasy plot with a giant
monster (in this case a moth of enormous strength whose wings have
changing patterns that mesmerize potential victims so that their
brains can be sucked dry) who goes around killing everyone until
it’s the end of the book and something works so that it gets
killed instead.

But the world-building and characters are both superb. The
world is inhabited by a number of intelligent species, which over
most of the world coexist by having their own territories, but in
New Crebuzon, the city where the action takes place, most of the
races are represented. Most of the main characters are humans as
we know them, but one is a hybrid beetle/human, who communicates
by sign language
with her own species, and with humans, such as her lover, who have
learned the signs. But she can communicate, although slowly, by
writing on a pad. And she’s a sculptor. In the climactic scene, she reenacts the
Orpheus/Euridice myth, with Eurydice’s motivations much
better explained than I’ve seen them in any other work of art
based on the story.

Another is a bird/human hybrid, who has been
punished for a crime by having his wings sawed off. There is also
a large population of the “remade”, who have been altered as
punishment, either just to punish them, or to make them useful for
some industrial process.

The main character, Isaac, is a scientist who makes a number of
morally dubious choices in the course of saving the city from the
moths, but is forced at the end to realize that all the choices he
could possibly make for using his invention to save his friend the
wing-deprived bird hybrid are wrong.

So if you want to know what the state of the art in Science
Fiction/Fantasy is, read this book. There are two others set in
the same world, and I have the next one on hold at the library.

If you remember, the last book I
read was heavy going, so I said I’d read something more fun next.

I picked up this
book because I used to enjoy reading Fay Weldon, who
in the 80’s was writing light fluffy comedies. She also has the
writing credit for Upstairs, Downstairs, which PBS
is still trying to recreate the success of, but without
understanding what was good about it.

I should have read the Wikipedia article linked above, which says:

During her marriage to Ron Weldon, the couple visited
therapists regularly. They divorced in 1994, after he left her for
his astrological therapist who had told him that the couple’s
astrological signs were incompatible.

It’s about a couple whose marriage is in trouble after the
husband starts visiting an astrological therapist. Most of the
book is the arguments of the troubled couple. It’s not completely
unfunny, but it certainly isn’t the light reading I promised
myself after Transition.

So I’m rereading Pride and Prejudice next.